Midway through Georgia Toews’s debut novel, Hey, Good Luck Out There, the protagonist, Bobbi, has just finished a grueling stint in rehab for alcohol addiction. Kicked out of her bedbug-infested apartment, she ends up wandering through the streets of Toronto dragging along a small carry-on suitcase. In a moment of desperation, she calls an old flame who might offer her a place to sleep for the night, even though she is uncomfortable with what such an arrangement might cost her. As she makes her way to the rendezvous, she considers the impression she might give to passersby: “I hoped that I looked like a young traveller heading offfully purpose, on her way to the airport, on an adventure.”

The first half of Luck is set in a downtown Toronto facility where Bobbi spends 30 days trying to work the program and fit in with the other participants. In the second half, she turns her attention to maintaining a facade of well-adjusted sobriety for her co-workers and family members while fending off homelessness. Bobbi’s neurotically obsessive scrutiny of how others perceive her is a recurring concern in the novel, but what she tries to hide on the outside comes pouring out on the page in such frank and alarming detail—vicious inner monologues, hallucinatory memories of past traumas—that readers may wonder how the writer managed to capture such nuance in the first place.

Born in 1990, Georgia is the daughter of internationally feted Canadian novelist Miriam Toews, author of A Complicated Kindness, All My Puny Sorrows and, most recently, the Scotiabank Giller Prize–nominated Fight Night. Later this year, Sarah Polley’s film adaptation of Miriam’s 2018 novel, Women Talkingstarring Frances McDormand, Rooney Mara and Jessie Buckley, will be released by Orion Pictures and Brad Pitt’s production company, Plan B.

All of this means that Georgia’s burgeoning literary career will likely attract more attention than most young writers are acccustomed to receiving. This is always the case when the child of someone famous ventures into their parent’s field, but Georgia isn’t looking to hide or revel in her family ties; she knows she will be dogged with questions about the connection when it comes time to promote Luck, which comes out May 31. She speaks of her relationship with her mother matter-of-factly: Miriam is available for advice and mentorship, and undoubtedly has influenced Georgia’s writing in myriad ways, but she does not give detailed notes or discuss technical writing techniques. Her feedback to Georgia is impressionistic, intuitive and honest. “We really don’t talk about writing,” Georgia says, “other than confirming that yes, it’s hard work, and it’s important work.”

Georgia grew up in Winnipeg and moved to Toronto in 2009; I met her five years ago through my partner, who knew Georgia’s brother, Owen, through the activist community in Winnipeg. I visited Georgia and Miriam in their elegant downtown Toronto home in the winter of 2022, a few months before Luck launched. We all sat in a high-ceilinged, wainscotted living room, Miriam in a plush recliner to my left, Georgia across from me on a couch with baby books strewn over it. The Toewses live in a multi-generational household: Georgia and her partner, Mark Boucher, occupying the top two floors of the house with their children, while Georgia’s octogenarian grandmother, Elvira Toews, has the main floor of the home (it was Elvira’s space we were sitting in). Miriam and her partner, Erik Rutherford, live in a laneway home at the back of the property.

Georgia and Miriam have a similar self-deprecating sense of humour, marked by the same deadpan delivery. Their dynamic is a casual yet attentive one; they never speak over one another and each listens intently to what the other is saying. They seem to build on each other’s ideas as easily as they trade off looking after Georgia’s infant son. When the conversation shifts to either of their respective careers, the other will instinctively reach for a soother or a board book to occupy the baby.

MORE: Faouzia could be Gen Z’s next big pop star

Writing runs long and deep in this family. Miriam’s late sister Marjorie wrote poetry and fiction, and their father wrote about Canadian politics and history, self-publishing a textbook called Classroom Comment. He also created placemats for children covered in historical facts and cartoons. Miriam remembers driving around Manitoba with him when she was a child, dropping off boxes of placemats to various restaurants.

She wasn’t surprised when Georgia began writing at a young age. “She had an older friend who knew how to write cursive really quickly,” Miriam says. “They’d be in Georgia’s bedroom and she’d be walking around, dictating stories to her friend—these long, epic stories, going back in time, with changes in tense and tone. There was horror and humour, and they’d fill notebooks. I thought, ‘Hey, she’s a writer. Good luck with that.’ ”

After high school, Georgia studied comedy writing and performance at Humber College in Toronto, and tried to become a stand-up comedian. The first piece of writing Georgia presented to her mother for input was a sketch about a foley artist using household items to record sound effects for an experimental film. In her early 20s, she worked as a writing assistant on the Canadian police drama Rookie Bluealthough none of her pitches got past the development stage.

Miriam knew when her daughter was trying to write like someone else. ‘She was very kind,’ Georgia says. ‘I had a rough first draft.’

Her first serious foray into fiction came after a momentous event occurred in her life: she checked herself into rehab for alcohol addiction. In Luck, Georgia set out to take a fresh approach to the recovery narrative. She sees film and literature where troubled characters ultimately find salvation as a hollow form of writing meant to coddle readers rather than address some fundamental truth about existence. “A lot of the traditional stories involve addicts suffering, going through detox, violence, that kind of sensationalized thing. I wanted to show where the work really is.” Her novel chronicles the mundanity of life in a 30-day program: the timed outings to off-site counseling groups; the strictly enforced curfews; the reprimands for possession of contraband (one character is rapped over the knuckles when found with craft scissors for a late-night haircut).

In writing the book, Georgia followed advice Miriam had previously given her: to write about what was most familiar. Miriam is known for novels that blur the distinction between reality and artifice, including books inspired by the suicides of her father and sister, and the Manitoban Mennonite community where she grew up. “For me, it’s not a conscious choice to write autobiographical fiction,” Miriam says. “You just begin to write. That’s the craft—you take the raw material and you shape it into a world. It’s always with the reader in mind. It’s this act of friendship, of reaching out and feeling less alone.”

It strikes me that this type of wisdom about writing from the heart might only be passed on in a relationship as close as mother and daughter. Mentorship between unrelated writers often proves elusive or inconstant. Mentors get busy and mentees struggle to ask for help. What is often an informal relationship can have trouble standing up to the pressures of day-to-day life. Perhaps the kinship between Georgia and Miriam has safeguarded them against these stumbling blocks. It seems a more indirect form of mentorship has developed between them—one born of mutual taste and connection, rather than professional urgency.

“We’ve never had that relationship where we’ve sat down and worked on my writing,” Georgia reiterates. Instead, Miriam offers a perspective no one else can: she’s known Georgia all her life. She knew, for example, when her daughter was trying to write like someone else. “She was very kind,” Georgia says, “because I had a really rough first draft.”

RELATED: ‘Framing Agnes’ re-enacts the real lives of trans people in the 1950s

Miriam fell into a similar trap early in her own career, trying to write like Toni Morrison, whose books she consumed voraciously. She quickly that attempting to write in another voice was not only a career-jeopardizing mistake but also a futile endeavor. Miriam also cautioned her daughter not to write around things in an effort to protect herself. “Suffering can be horrifyingly beautiful,” Miriam says, especially when paired with a “shadow of hope.”

Much of Miriam’s literary output has grappled with dark and difficult subjects. In her most recent novel, Fight Night, she took a lighter touch. The book is a celebration of her mother, Elvira, the most hopeful, resilient person she has ever known. “The things that happened in our family’s lives—mental illness, suicide, addiction—my grandchildren will learn of these things,” she says. “I wanted to provide them with another narrative, so they wouldn’t feel a curse of heredity. There are other things going on in our family as well.” 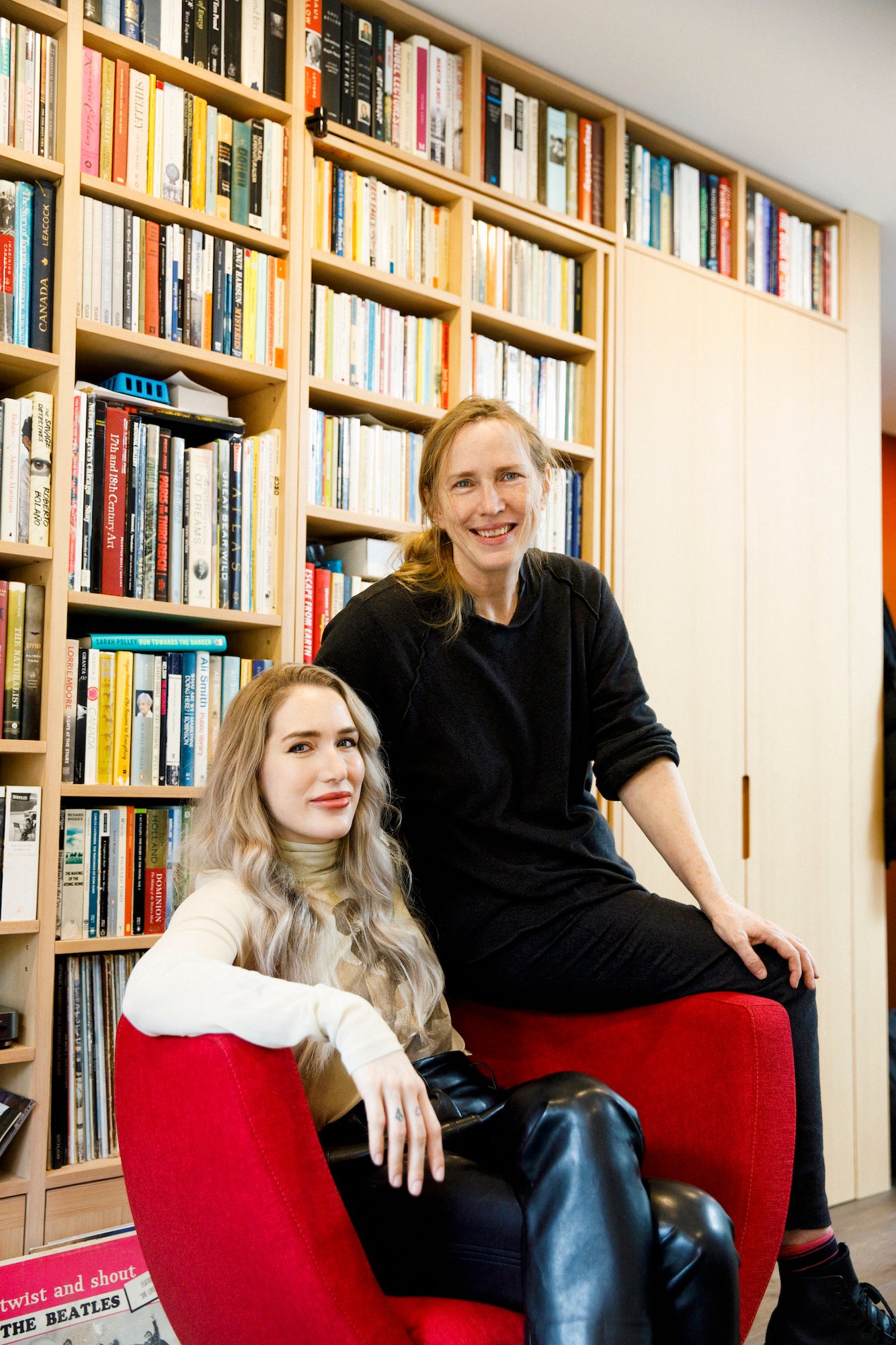 There are rumours that Fight Night will be Miriam’s final novel. In a recent New Yorker piece, she described a fantasy of leaving writing behind her for good. When we met, she seemed to have settled on a decision to retire from publishing and focus on being a full-time grandmother to Georgia’s two children, as well as Owen’s two kids in Winnipeg, where she regularly travels for weeks at a time. “It’s such a great time in my life,” she says, as she bounces her grandson on her knee.

Miriam launched her career while in the throes of raising young children. She would sneak away to write a fragment of a thought on a piece of paper whenever she could and found a laser focus when her children were at daycare, eschewing the dishes, the laundry and the phone to work on the world she was bringing to life . “I’ve never got as much work done as I did when my kids were young,” she says.

READ: Is it ethical to have kids in the climate crisis?

Georgia, meanwhile, wrote and edited Luck over the course of two pregnancies and credits her husband, a filmmaker, for taking care of the children after his workday and validating the time she needed to meet deadlines. The pressures of domestic life seemed to help Georgia just as they did her mom. “Fear of losing time was a great motivator to finish,” she says.

While writing Luck, Georgia was briefly worried that people might use the stark subject material to criticize her parenting. “I didn’t want people to think I was an alcoholic mother,” Georgia says. In the end, she decided to follow Miriam’s lead and lean into the idea that writing is an act of friendship. “I trust that there’s this relationship with the reader where they understand that it’s not me telling my story,” she says.

In a scene near the end of the book, Bobbi retreats to the shower when unwanted guests crash her room in the hostel where she is staying. She imagines being attacked with a knife, as though she were in a horror movie. “Getting gutted didn’t scare me as much as what my obituary would say. Or the eulogy my family would give at my funeral,” she says. “Everyone would assume my death was connected to my sady past, and I would die an addict in everyone’s minds, despite being stone-cold sober.”

The passage is a window into Bobbi’s fragile state of mind, leading a person to spiral down winding paths of doubt and anxiety. Georgia describes writing the novel as therapeutic, a second step to her own recovery. “I took inspiration from my mother because she’s fearless,” she says. “She is always telling the truth through fiction, and I think the world is better for her novels. Writing is how she is surviving, and writing is how I can survive.”