Russia has carried out simulated launches of nuclear-capable missiles from an enclave of territory in mainland Europe, amid growing fears Putin could press the button as the war in Ukraine goes against him.

The drills did not involve any actual missiles being fired.

The Iskander is a short-range ballistic missile developed by Russia that went into service in 2006 to replace the Soviet-era Scud and Tochka rockets.

Iskanders are the workhorse of Russia’s missile forces and can perform a wide variety of roles depending on the warhead they are fitted with.

But the most eye-catching of the Iskander’s warheads is a nuclear charge, thought to be around four times as powerful as the bomb that destroyed Hiroshima.

The missiles have a range of up to 300 miles and are most-commonly carried by road-mobile launch vehicles, which makes the missiles much harder to find and destroy.

Iskander missiles are known to be stationed in Kaliningrad – Russia’s central European enclave – and, since the start of the war in Ukraine, in Belarus.

Fired from these positions, Iskanders are capable of ranging the Baltic states – Latvia, Estonia, Lithuania – as well as most of Poland, Ukraine, Moldova, and even parts of southern Sweden.

Drills also involved more than 100 soldiers rehearsing what to do in the event of a nuclear or chemical attack on them.

It came at the same time as Belarus – which supported Putin’s invasion by allowing Russian troops to attack from its territory – staged its own war games.

Minsk announced the ‘surprise’ drill Wednesday to test the reactive capabilities of its army, the defense ministry said, while insisting it posed no threat to its neighbors.

Belarus military units were testing their capacity to “go on the alert, move to predetermined zones and undertake combat training,” the ministry said.

“The aim is to evaluate the readiness and the ability of troops to react rapidly to a possible crisis,” it continued, describing the manoeuvres as a “surprise” exercise.

It published photos of columns of vehicles, including tanks, moving along roads.

The exercise will be closely watched by Kyiv, which has repeatedly accused Belarus of planning to send troops into Ukraine to help Russia’s military operation against its pro-Western neighbor.

A top Ukrainian official said the country will be ready to respond if Belarus attacks.

But British intelligence said early Thursday that such a prospect was unlikely, with the drill being ‘in line with seasonal norms’.

‘Russia will likely seek to inflate the threat posed by these exercises in order to fix Ukrainian forces in the North,’ the Ministry of Defense said.

‘[But] deviation from normal exercise activity that could pose a threat to allies and partners in the region is not anticipated.’

Russia has resorted to nuclear sabre-rattling as the war in Ukraine has stumbled, with state media near-daily threats last week. 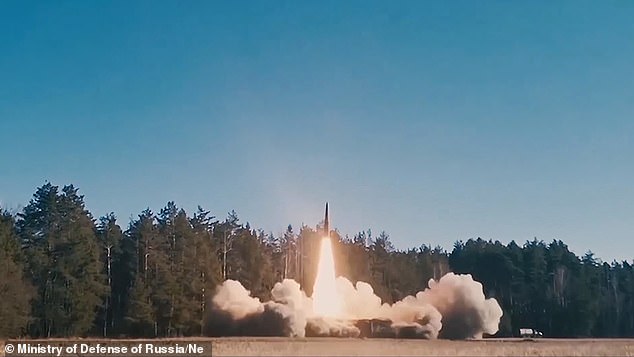 Iskander missiles are fired from mobile launch trucks and can range up to 300 miles, putting most of eastern Europe within their reach (file image)

State propagandists threatened on at least three occasions to destroy the UK with nuclear weapons, while also suggesting Paris and Berlin could be targeted.

Vladimir Putin also issued a threat that was widely perceived to be nuclear – saying any country deemed to be interfering in Ukraine would face a ‘lightning fast’ retaliation using weapons ‘no other country can boast of’.

The phrase is assumed to be a reference to Russia’s new Samrat 2 nuclear missile, which Putin had tested just days earlier and referred to at the time as ‘unique’.

It echoes a threat Putin made at the start of the war, saying any nation that seeks to block his ‘special military operation’ will face consequences ‘unseen in their history’.

While some nukes are kept in a state of constant readiness, the majority of warheads are stored separate from their launch systems and in a deactivated state.

Increasing nuclear readiness can mean activating warheads and pairing them up with launch systems. It could also mean dispersing those systems across a wide territory to reduce the odds of them being destroyed before they can be used.

But, despite Putin’s order, US intelligence says it has seen no signs that Russia has actually increased its nuclear alert status.

James Heappey, the UK armed forces minister, also dismissed the Kremlin’s rhetoric as ‘bravado’ and said the fact that Russia is resorting to such threats indicating its invasion is not going to plan.