The pupilary light response helps our eyes see the world around us in various lighting conditions ranging from bright, sunny days to dark, moonlit nights. Like a camera’s aperture, this adaptive reflex makes pupils smaller when light hits the retina and bigger in low-light situations.

However, contrary to conventional wisdom, pupil size isn’t just a reflection of how much light is hitting the retina. In recent years, pupillometry researchers have established that challenging cognitive tasks and other emotional stimuli, such as sexual arousal, cause pupils to get bigger regardless of ambient light.

For example, if you can, picture a group of early Homo sapiens in your mind’s eye as they’re trying to escape nocturnal predators in a dark forest or primeval jungle eons ago. (Note: Anyone with aphantasia can’t create this type of mental imagery or picture visual fantasies in their mind’s eye.) 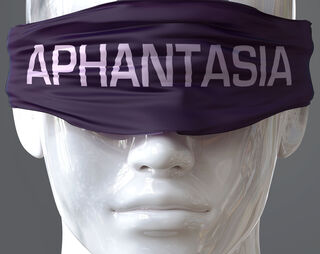 People with aphantasia have a “blind mind’s eye.” They can’t create mental imagery or visualize things using their imagination. On the opposite end of the spectrum, people with hyperphantasia can imagine extremely vivid visual images in their mind’s eye.

Pupillometry researchers at Princeton University recently discovered (Mon et al., 2021) that written passages with conventional metaphors or clichés like “raining cats and dogs,” “the early bird gets the worm,” or, “tip of the iceberg,” caused readers’ pupils to widen like saucers and “perked up” their attention.

On the flip side, Mon et al. found that literal paraphrases and concrete sentences without visually-rich metaphors were more likely to cause people’s eyes to “glaze over” as indexed by their pupils not dilating or getting bigger.

Now, another pioneering pupillometry study (Kay, Keogh, Andrillon, & Pearson, 2022) reports that when people use their imagination to visualize “dark” or “bright” mental images in their mind’s eye, it can change pupil size—even if the amount of light hitting the retina stays the same. These findings by researchers at the University of New South Wales (Australia) were published on March 31 in the peer-reviewed journal eLife.

In a first-of-its-kind discovery, the UNSW researchers found that the vividness of someone’s mental imagery correlates with changes in pupil size or lack thereof. Having a strong imagination and the ability to conjure up vivid mental imagery is associated with larger pupils during visualization exercises.

In the first experiment, researchers had study participants look at extremely bright vs. very dark objects against a neutral gray background while measuring each person’s pupillary reflex.

Looking at glaringly bright shapes (comparable to looking up at a sunny sky on a cloudless day) caused everyone’s pupils to constrict and get smaller. Conversely, looking at dark objects (comparable to walking into a pitch-black room) caused pupillary dilation, making pupils bigger. Notably, study participants with aphantasia and non-aphantasic people had the same pupillary response under these conditions.

In the second phase of this experiment, researchers asked study participants to imagine the objects they’d just seen in real-life in their mind’s eye, using visual imagination. They were also asked to rate the “vividness” of their mental imagery while wearing glasses that gauged changes in pupil size.

“These findings further highlight the wide variability of the human mind that can often remain hidden until we ask someone about their internal experiences or invent new ways to measure the mind,” co-author Rebecca Keogh said in a news release. “It reminds us that just because I remember or visualize something one way doesn’t mean everyone does.” Although people with aphantasia can’t visualize mental images, their creativity—and the ability to imagine—manifests in other non-visual ways.

“While it was already known that imagined objects can evoke so-called ‘endogenous’ changes in pupil size, we were surprised to see more dramatic changes in that reporting more vivid imagery. [Our research] is the first biological, objective test for imagery vividness,” senior author Joel Pearson added.

Pearson runs UNSW’s Future Minds Lab, which is currently developing an online method for measuring varying degrees of mental imagery and aphantasia using pupillometry techniques that could be scaled up and used globally. The Future Minds Lab team is developing objective and reliable tests for measuring the spectrum between aphantasia and hyperphantasia (extremely robust visual imagery) that could be scaled up and used by people around the world on their digital devices.

Measuring varying degrees of vivid mental imagery using pupillometry shows promise for advancing our understanding of neurodiversity related to how people from all walks of life use imagination. Because aphantasia doesn’t seem to impair creativity, it will be interesting to see how people who can’t create visual imagery compensate during their creative process and how these compensatory mechanisms affect pupil size.