No option to rotate a display in a vertical oriented shoot-em-up is a worrying sign. In addition, the option is conspicuously absent in Miss Kobayashi’s Dragon Maid. What it does boast, though — unusually for a niche Japanese release — is a top-to-bottom English language translation, which makes this a more tempting import for shoot-’em-up fans.

We admit to having no knowledge of the Manga on which the game is based, but its manifestation as a colorful bullet hell escapade is nonetheless appealing. This is a game as much for anime aficionados as it is hardcore gamers, littered with illustrations, fetching menus, and plenty of fan service. Clothes partly tear off when a character’s life bar diminishes: a translucent, semi-naked girl flashing over the action to inform you of danger; While elsewhere, risqué galleries are furnished by collecting in-game picture pieces.

Part-Touhou, part-Castle of Shikigami, Dragon Maid’s bullets come thick and slow. There are no visible hit-boxes, which leaves a certain amount of guesswork as to where your sprite’s vulnerability lies. It’s still fun to weave through endless flowering waves of orbs and triangles, although graphically it’s slightly simplistic, with its cel-shaded enemies oddly detached from the background scenery. 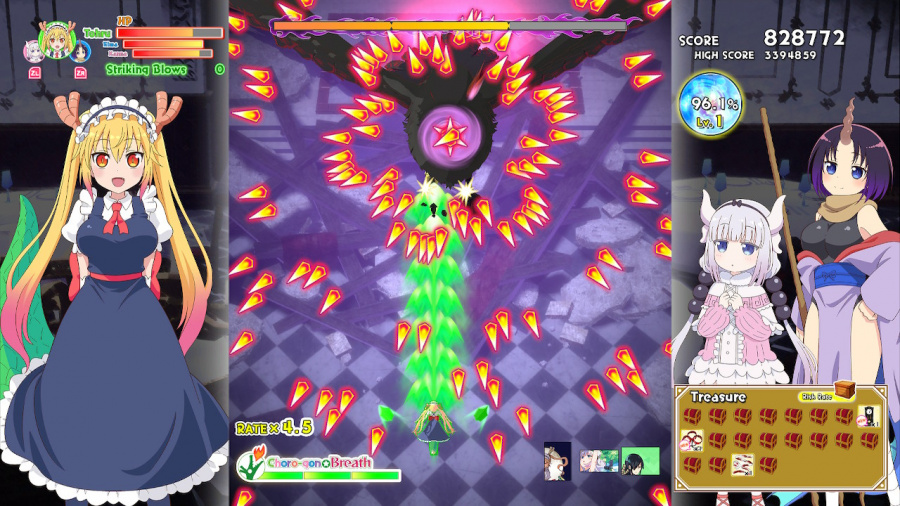 You have three female characters to tag between at will. If one takes too much damage, you can swap her out, leaving the unused two to slowly regenerate their health bars. Other novel mechanics include a back step that zips you to the bottom of the screen, and a powerful dash manoeuvre that’s integral to building combos and attack levels.

The dash can be tapped or charged up, sending you smashing into the nearest enemy at speed. Keep tapping the button and you whip from one adversary to another, increasing your combo chain and occasionally earning a period of increased firepower if you can sustain it. Sadly, there’s a feeling of imprecision about the manoeuvre, and the risk to reward ratio isn’t overly encouraging when you accidentally eat a bullet.

Each girl has a different shot type — spread, homing, and channelled fire — but they feel underpowered for too long in a game that only sports five brief stages. Combos build your ‘dragon meter’, which levels up your shot power — but there’s an issue with its slow speed of increase. Hold a decent chain and you can expect to level-up just before the end of stage one, but the visual feedback and power upgrade feels perfunctory and negligible until you achieve level three status, by which point you will be nearing the end of the game . 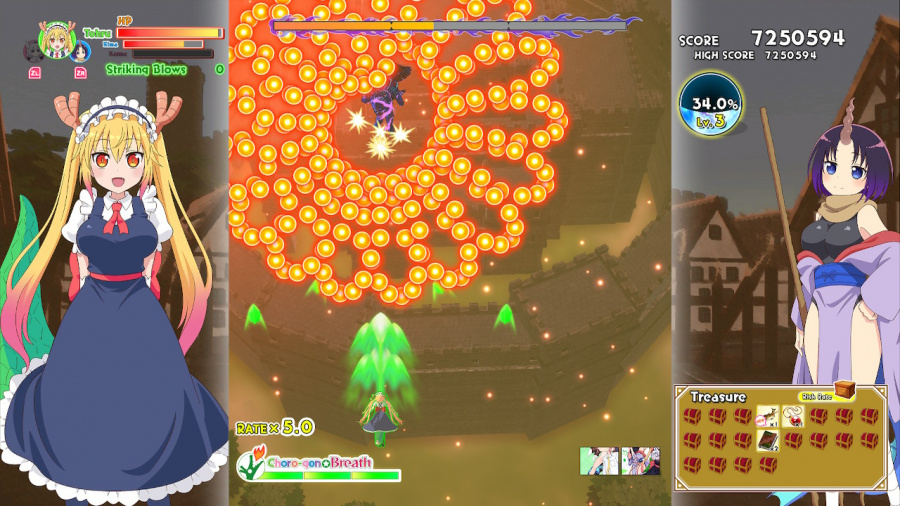 Improving your skill does speed this up somewhat, but it takes plenty of practice. For comparison, your average bullet hell affair will often see you at maximum power and carving up the screen toward the end of stage two. That just isn’t the case here, diminishing the kind of positive destructive feedback the genre is famous for.

Despite this, Dragon Maid has some solid plus points. It’s colourful, crammed with voice acting, text, and anime-grade humour that even pokes a little fun at Final Fantasy. Its weighty boss battles feature some very creative patterns that are fun to weave through, and the play mechanics are interesting. You can practice a stage and restart from the beginning of one when you die, but you don’t get any continues in the traditional sense. Your bomb stock of “Choro-gon Breath” — essentially a big dragon burning stuff — is certainly handy in the thick of it, since it’s fairly challenging on defaults, especially when one of your three characters is permanently dispatched.

While its prolonged boss fights are certainly the highlight, there’s something lacking in the overall balancing. Bullet hell, generally, is an unbroken onslaught; But whereas in a CAVE title each stage tends to have a unique personality, featuring different swarms, enemies and rhythms, Dragon Maid seems all rather samey.

Dragon Maid is a middling shoot-em-up affair: not bad, not exceptional. Its tag team concept is a sound one: it’s fun to juggle characters in an attempt to keep all your horses in the race, grabbing health items from mid-bosses and seeking out paths through the maelstrom. At the same time, its nuance and novel ideas are hamstrung by unremarkable stage action, and a few niggling missteps, which is a shame. There’s definitely enjoyment to be reaped from committing to a one-credit clear, learning bullet patterns, and eking out routines. But when there are so many games in the field featuring greater urgency, flow, and an all-important sense of personality, this one is more for people with cash to spare, fans of ecchi paraphernalia, or a burning desire to consume everything bullet hell.