On the eve of LGBT Pride Month, I’m thinking about how to best support LGBTQ+ teens right now.

Better resources are needed for LGBTQ+ teens to find spaces that reflect their identity and allow for the safe acquisition of skills to deal with stressors in their homes and communities.

Fortunately, a new study, currently under peer review, shows some positive results for an online tool supporting the mental health of LGBTQ+ teens. The study tested imi (pronounced “eye-mee”), an interactive digital tool developed by Hopelab, CenterLink, and the It Gets Better Project and co-created directly with LGBTQ+ teens throughout the country. imi has four “guides,” with exercises to support identity affirmation and cognitive and behavioral coping skills.

The guides share skills and help individuals deal with environmental stressors around gender identity, sexual orientation, stress and coping, and internalized homophobia, defined as the internal effects of discrimination, phobia, and negative messages and experiences on a targeted group.

Researchers at the University of Pennsylvania’s Program on Sexual, Technology, and Action Research (PSTAR) and Hopelab randomized 270 teens who identified as LGBTQ+ to either four weeks of use of the imi app or a control condition that got access to a list of health, mental health, and other resources for LGBTQ+ teens. Teens were asked to use both conditions as little or as much as they wanted for four weeks and were asked questions about their mental health, their use of coping skills, and how well they believed they were able to handle stress.

Those in the imi group reported stronger positive that stress is a surmountable challenge and used more coping strategies over time than the control group. Further, teens who used imi more reported greater use of these coping skills, highlighting that imi use was likely responsible for their bullets of skill use. 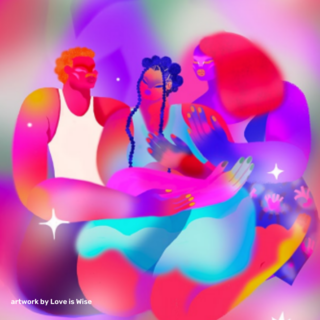 Results showed imi boosts positive coping skills and mindsets that are important for the mental health of LGBTQ+ youth.

Source: Love is Wise for Hopelab, used with permission

Interestingly, teens in both groups showed reduced depression and anxiety symptoms during the study, and the groups did not differ. So it looks like the unique impact of imi is on the way teens are able to view challenging situations that come up in their lives, a helpful skill for long-term thriving.

While not tested in this initial trial, there is hope that early and long-term use of an online tool like imi could help bolster LGBTQ+ teens through some of the more serious challenges they may face through the adolescent years.

Some additional unique features of the imi project that are worth highlighting include:

It is heartening to see an increasing number of opportunities for LGBTQ+ young people to see themselves reflected online. The attention paid to creating a teen-centric solution focused on how teens thrive, paired with the scientific rigor to know how a tool impacts young people, gives me hope for a more resilient generation of LGBTQ+ young people.

Note: As Senior Director of Research at Hopelab until 2021, I had a role in the early design of the imi product and the study described here. However, I was not involved in carrying out the study nor in reporting the results.