UPSTANDING: Donna Challender, founder of the Upright Canine Brigade, shows examples of dogs with megaesophagus in their high chairs. (Photo by Rick Mellerup)

Who said you can’t teach an old dog new tricks?

At first glance the image of a dog sitting in a high chair while eating is downright hilarious. Sure, many people consider their pets to be their “babies.” But isn’t seating a dog – or in some cases a cat – in a high chair for breakfast, lunch and dinner taking things more than a wee bit over the top?

Actually they are doing so for a serious, even deadly reason. Their pets suffer from megaesophagus. “Megawhat?” you may ask.

The Upright Canine Brigade, a nonprofit 501(c)(3) group founded by Tuckerton’s Donna and Bob Challender, defines the disease this way:

“Megaesophagus is exactly what it sounds like it is, an enlarged or stretched esophagus (the tube that carries food from the mouth to the stomach). A normal esophagus moves food to the stomach with wave-like contractions called peristalsis. An ME dog’s esophagus loses its muscle tone, becomes enlarged, and can develop pockets where food can become trapped. Since the esophagus does not function normally, food sits in the esophagus and doesn’t make its way to the stomach. This can cause malnutrition and regurgitation of vast amounts of undigested materials.”

Some of the signs of megaesophagus in dogs include weight loss, muscle loss, difficulty swallowing, bad breath and rapid breathing. But the main symptom of the disease is regurgitation, which is different from vomiting. 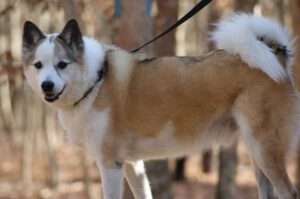 Pet owners are familiar with vomiting, also known as emesis. When dogs, cats or even humans vomit it is often a forceful and noisy process. It is controlled by the vomiting center in the brain, producing the opposite of swallowing with peristaltic waves starting in the small intestine or stomach, moving upper gastrointestinal contents up and through the esophagus and mouth, thus earning the name antiperistalsis. A great example: a cat throwing up a hairball.

On the other hand, regurgitation is usually quiet and sometimes barely noticeable, with no retching. When a dog regurgitates, the food simply rolls out of the mouth, looking a lot like it went in.

It is regurgitation that poses the biggest threat to a dog, and as stated before, sometimes a cat. When a pet regurgitates, some of the food, water or saliva can go “down the wrong tube” and into the lungs, causing an infection called aspiration pneumonia or AP, which can be a killer. Let’s let the Upright Canine Brigade explain:

“It is imperative that your dog be seen right away by your vet if you suspect AP. Symptoms of AP in dogs include the dog showing signs of having trouble breathing, congestion, secretions from the nose, coughing or sneezing, not drinking water or eating, not playing, a bluish tinge to the skin and sometimes a fever. Also look for other signs of difficulty breathing, such as the dog pushing his or her lips when breathing heavily.”

Veterinarians can treat AP with antibiotics. But can they treat the underlying problem, megaesophagus? It isn’t likely. Vets can accurately diagnose megaesophagus employing X-rays and ultrasounds because they can reveal an enlarged esophagus and material in the esophagus. But they have no magic pill to turn to. In some cases surgery could be attempted to correct a congenital defect such as PRAA – persistent right aortic arch – that can cause ME. Yet it is a risky procedure. According to Donna, too many vets still consider megaesophagus a death sentence.

By the way, there are two main types of megaesophagus and it isn’t limited to older pooches. Some dogs are born with the disease and the condition can usually be noted by 12 weeks of age as they are nursing or being bottle fed. Older dogs develop acquired megaesophagus, sometimes which may be secondary to underlying conditions such as myasthenia gravis (“gravis is Greek for weak muscles,” said Donna), trauma, hypothyroidism and Addison’s disease, most of which can be diagnosed by simple blood tests.

Certain breeds are more likely than others to be born with or develop megaesophagus. They include miniature schnauzers, wirehaired fox terriers, German shepherds, Newfoundlands, Great Danes, Irish setters, shar-peis, grayhounds and Labrador retrievers. By the way, Siamese are the cats most associated with the disease.

So if there is no pharmaceutical cure, and surgery can be iffy, what can be done for dogs and cats with the disease?

Management, including the use of high chairs.

The Upright Canine Brigade, with over 14,000 members worldwide, wants people to know in no uncertain terms that “megaesophagus is not a death sentence, that it can be managed with superior feedings and nutritional modifications and that EM dogs can live long and happy lives.”

The key to this supportive care are “Bailey chairs,” aka dog high chairs (although, once again, ME can hit cats as well) or dog feeding chairs. Dogs can be trained to sit in specially designed, well-fitted, Bailey chairs – which, by the way, got their name from the original dog that employed one – as they eat. The digestive process is helped by the sitting position they are put into, creating a straight line from the mouth to the stomach, letting gravity do what the esophagus muscles can’t. “It’s a straight shot right to the stomach,” said Bob Challender. Dogs usually eat while standing, with their heads down, creating a long and winding road to the stomach.

The obvious question is how can you train a dog (and just imagine a cat; have you ever tried herding them?) to eat in a high chair? Well, how do you train a dog to do tricks? You give them a treat and shower them with praise after they perform well. Use the same method. And there’s an extra incentive for them to climb into a high chair (an excellent trick is to have them jump up on an adjoining chair and then back into the Bailey chair) – food! What dog doesn’t love meal time? If you get them to associate dinner with the Bailey chair, training usually can be a fairly quick process.

If you are creative you can build your own Bailey chair. Indeed, that is almost necessary when you have a growing puppy that needs new Bailey chairs as often as children need new shoes.

“Baskets, boxes, high chairs, baby front packs, you name it, one ME parent has tried it!” reads an Upright Canine Brigade pamphlet.

A number of companies, including Amazon, also offer them online. The better sellers explain how to take your dog’s measurements, which when sent to them along with a picture allows them to custom-design your pet’s chair. As an aside, the number of pet products that can be found online is amazing, including things such as wheelchairs for dogs, for those missing legs in back or in front.

Dogs are known for “wolfing down” their food, probably an instinctual behavior from the days when their pack ancestors would fight for meat from a fresh kill. But you have to give gravity some time for an ME’s food to reach the stomach.

“Upright time depends on how quickly your dog can digest their meals,” says the Upright Canine Brigade pamphlet. Typically, the absorption rate is anywhere between 10-45 minutes. Experiment with times. If your dog regurgitates their food shortly after eating, try adding more upright time to let gravity do its thing.”

Many ME dogs cannot lap water so water must be added to their food.

There are several recipes available that may help add nutrition and weight to your dog. Check them out on the Upright Canine Brigade’s website at CanineMegaosophagusInfo.com.

Try a “Pro Collar” or “Neck Hug,” which elevates the dog’s head off the floor when they are laying down. Saliva often pools in their esophagus and when they are wearing such a collar it helps move saliva down. They can be found at larger pet supply stores or, of course, online at sites such as wagtailfarms.com.

In severe cases feeding tubes must sometimes be used.

Ask your vet if an antacid should be prescribed.

You can get more information from the Upright Canine Brigade by visiting its website. It has pages of info including useful links, tutorials, recommended products and a list of veterinarians in all states that were recommended by members of the group. You can also reach the Challenders by email at uprightcaninebrigade@gmail.com.

Led to the UCB 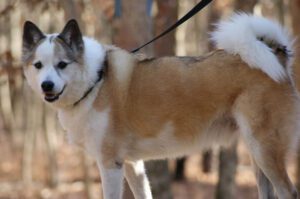 “Kodi,” the dog that inspired the formation of the Upright Canine Brigade. (Supplied Photo)

The inspiration for the Upright Canine Brigade was a pup named Kodi, a mixed-breed (“mostly husky,” said Donna). The Challenders got Kodi when he was just 2 months old and displayed all of the considerable energy of a husky. But when he was 8 years old, he slowed down so much that it was clear it wasn’t normal aging but something more serious.

“He actually couldn’t walk, it was that bad,” said Donna.

A veterinarian at Penn diagnosed Kodi with canine myasthenia gravis, often a precursor to megaesophagus. Kodi never developed the latter, but the Challenders kept wary eyes on him, making sure he didn’t develop it. “We thought he did once,” said Donna, “but he was one of the very lucky ones.” Kodi lived to be over 11 years old.

Still, the Challenders had heard about megaesophagus for the first time and they were intrigued. They discovered an online group in Canada that dispensed information, which has since been archived. Then, on Oct. 9, 2012, Donna made a first post introducing the world to the Upright Canine Brigade.

She should remember the date because the UCB has become an integral part of her and her husband’s lives. They, for example, schedule their vacations around veterinarian conferences across the country where they attempt to educate vets about the condition. In June they’ll travel to Austin to attend one. UCB members also exhibited at pet fairs.

June is Canine Megaesophagus Awareness Month, during which UCB holds a calendar contest to raise funds. The dogs or cats with the most likes highlight a month on the calendar and every special pet gets their special day on it. The monies raised help fund megaesophagus research at vet schools, such as the College of Veterinary Medicine at Washington State University, which conducted a study titled “A randomized crossover study of compounded liquid sildenafil for treatment of generalized megaesophagus in dogs.” In the past six years the Brigade has donated over $28,500 toward supporting such studies.