CNA – A lot has happened in the past two years. We’ve had to get used to wearing masks and working remotely from home. But all those changes don’t mean we’ve reduced our communication. In fact, we now have to work harder at making ourselves heard, be it via Zoom or in our masked selves.

Refrains ranging from the polite (“can you please repeat that?”) to the impatient (“huh?”) often crop up in our conversations – and they may be repeated more often – and in louder and more forceful measures, too – as people struggle to make themselves heard from behind masks or screens.

Not only that. “Because it is hard to read body language clearly from small screen images, you may be filling the silence by talking more than if you were in an in-person meeting,” noted principal speech therapist at Tan Tock Seng Hospital’s (TTSH) Department of Otorhinolaryngology Francoise Lim. “Or you may be speaking louder than necessary if you perceive people cannot hear you.”

Posture plays a part as well, said Lim. “If you are hunching over your laptop, this adds to the reduced breath support for speech as well as the strain to your neck and back.”

Repeat this many times over the course of a day, multiply that by weeks and it’s no wonder that many people are feeling sore in the throat or sounding hoarse. “Since the pandemic started, we have noticed increased functional voice problems among the patients we see,” said consultant from the Department of Otorhinolaryngology at TTSH Dr Chew Hui Sing, who is speaking on voice loss at this webinar. 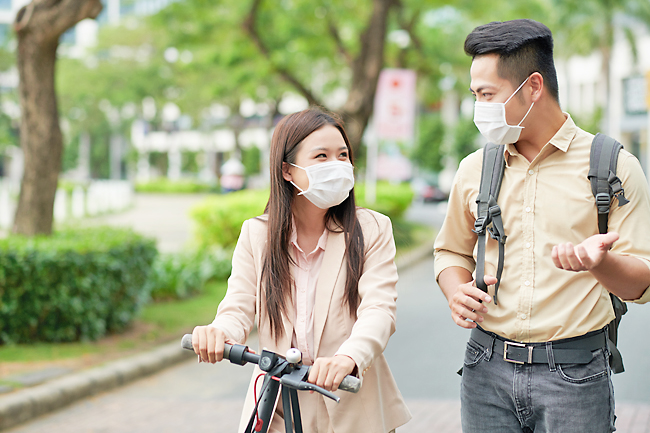 To put it simply, your voice is produced when air vibrates your vocal folds and those vibrations get shaped and amplified by your throat, mouth and nose.

It all happens in your voice box or larynx, where you’ll find two bands of muscle tissue known as vocal folds.

When you are not speaking, the vocal folds are opened so that you can breathe, according to the United States (US) National Institute on Deafness and Other Communication Disorders. When you speak, the vocal folds snap together. This action allows air to blow past the vocal folds and vibrate them, creating your voice. As for your pitch (how high or low your voice sounds), tone (how your voice sounds on the whole) and volume, they are dependent on the size and shape of your throat, nose, mouth. Like your very own built-in Esplanade Theatre, they resonate and amplify the vibrations produced by your vocal folds.

When the vocal folds fail to close, “it can result in a weak, breathy voice, vocal fatigue and effortful speech,” said Dr Chew. “You may also experience choking or coughing, especially on drinking.”

What about when you find yourself suddenly unable to produce any sound when you speak? If you were strenuously using your voice within the last 24 hours, a sudden loss of voice could indicate bleeding in the voice box, said Dr Chew. You’ll want to rest your voice and seek early medical attention.

If your hoarseness or voice change persists for more than two weeks – especially when you haven’t had a cold or flu, and you’re a smoker – you should consult a doctor, said Dr Chew.

Seek early help, too, if you also have any associated symptoms to rule out cancerous growths, such as difficulty in breathing, pain when you swallow, coughing up blood, lump in the neck and reduced appetite.

In the meantime, should you be guzzling honey water or any other home remedies that you believed to be soothing? Technically, no food or drink comes into contact with your vocal folds, said Lim, otherwise, you would choke. “Drinking honey water, sucking on lozenges, and gargling with salt water may soothe your sore throat, but they work mainly to provide transient symptomatic relief,” she said.

“Some research suggested that drinking honey may help with sore throats due to its antimicrobial and wound-healing properties,” said Lim. “And this may give you some pain relief.” However, do not give honey or honey water to children under the age of one; honey may contain spores that have bacteria that can produce a toxin dangerous to infants,
she said.

Having said that, it is important to increase your fluid intake as fluids hydrate your body on the whole and, in turn, lubricate your vocal cords. “Well-lubricated vocal cords vibrate better and give you a better voice,” Lim explained.

But avoid caffeinated drinks such as coffee, tea and cola soft drinks as well as acidic beverages such as fruit juices, she said. “The best drink is plain water.” Sip water throughout the day; you’ll know you’re well hydrated when your urine appears pale or almost colourless, she said.

You might also want to forgo lozenges, especially if they contain menthol or peppermint, said Lim. The cooling sensation may number your throat and temporarily mask the discomfort. But these ingredients can dry out and irritate your voice box, she said. “You may have a false sense that your throat is fine. As a result, you may continue to speak or shout, and further damage your vocal cords.”

Instead, a humidifier may be a better bet than lozenges and drinking more water. “The water droplets in humidified air are breathed in rather than swallowed, and therefore, have direct contact with our vocal cords. This helps to improve the lubrication of the voice box,” said Lim.

Besides straining your voice on video calls, there are some medical factors that can cause you to sound hoarse. “The changes to the voice box and the duration of hoarseness would depend on the cause,” said Dr Chew. Here’s a look at what they are and why they make you sound like the raspy-voiced Awkwafina.

The most common cause is a cold or respiratory tract infection.

“The nasal cavities play an important role in the resonance of your voice,” said Dr Chew, so it is not unusual for you to sound muffled when you are having a cold.

The voice box itself may also be “inflamed or swollen” due to the infection or from “repetitive coughing or throat clearing”, she said, adding that such hoarseness usually resolves by itself within two weeks.

Nasal congestions caused by nasal allergies can affect your voice’s resonance, as can the post-nasal drip – the feeling of mucus moving down the back of the throat, said Dr Chew.

Because of this back-dripping mucus, your throat gets irritated, making you cough or clear your throat – and those actions, repeated over time, can irritate the voice box and lead to hoarseness.

“Gastric acid can rise and damage the voice box,” said Dr Chew. You’ll know you’re losing your voice to gastric acid when you also have phlegm in the throat, the sensation of a “lump in the throat”, throat clearing, bad breath or a bitter taste in the mouth, and an itchy and irritative cough. “The voice is usually worse in the morning or after meals,” she added.

These include nodules, cysts and polyps, which can arise from the repetitive overuse or misuse of the voice, said Dr Chew. These growths can also be caused by excessive coughing or persisting to talk when you are ill. “Your voice can sound rough, and you may also experience vocal fatigue or discomfort with prolonged speaking,” she said.

This condition is created by an imbalance in “muscle coordination and breathing during voice production”, said Dr Chew. As a result, there is “excessive muscle tension in and around the voice box when you speak”. You are also likely to feel “pain or tension in the throat while speaking or singing”, she said.

Other than sounding raspy, your voice may also sound strained, weak and airy, or there’s no sound at all, said Dr Chew. There may be changes in your voice pitch, your voice breaks or you suffer from vocal fatigue – and these symptoms typically get worse after talking a lot or when you’re stressed or anxious.

According to Dr Chew, there is a commonly no obvious cause to the paralysis, although viral infections, growths on the voice box nerve (eg thyroid cancer, tumour at the skull’s base, neck or chest) or damage to the voice box from previous surgeries can be possible triggers.

“Depending on the underlying cause, the paralysis may be temporary or permanent,” said Dr Chew. If the voice box nerve is not severely damaged or severed, “good recovery” can be made between three and nine months – although, in some cases, the recovery may be slower (over a year) and incomplete, she said.

Just as the rest of your body loses muscle mass as well as thins and dries out as you age, the same can happen to your voice box, too. In fact, its position can also become lower over time. “Your voice may gradually soften and you may find it more effortful to speak,” said Dr Chew.

Hormonal changes may also affect the way you sound as you age, she said. In men, the voice generally becomes higher in pitch; in women, the opposite happens and they may sound lower in pitch. Such changes are gradual and do not affect your ability to communicate, she added. But if the changes occur early in life and/or impacts your daily life, seek medical help, she said.

It is not common but your risk is higher if you are a smoker, said Dr Chew. “Hoarseness can be the first sign. There may be other associated symptoms such as breathing difficulty, pain in swallowing, coughing out blood or blood detected in the saliva, neck lumps, or appetite or weight loss.”

Low thyroid hormones or hypothyroidism may cause the voice box to become swollen and heavy. This condition is known as polypoid corditis or Reinke’s edema, said Dr Chew. The resulting voice is often very low pitched and rough.

“Certain neurological conditions such as Parkinson’s disease can affect the voice,” said Dr Chew. Patients may have difficulty projecting their voices or experience vocal fatigue. When they speak, their voices may tremble or fluctuate in volume.