Every once in a while, we need to release some pent-up frustration or aggression.

Your heart races, your blood pressure increases, your breath quickens, and your muscles are ready for physical exertion.

This fight-or-flight response was designed to protect your body in an emergency by preparing you to react quickly.

That doesn’t mean you should grab whatever weapon you find nearby and bludgeon someone.

If you feel an uncontrollable impulse to do that, then you probably really need to pick up some anger management skills – hopefully, before actually giving in to that impulse and hurting someone.

Sometimes, taking deep breaths help when you feel like slapping someone, but when you really feel like “exploding”, it may not work as you need an outlet to release your emotions quickly.

As your stress hormones, such as adrenaline and cortisol, have kicked into gear and you’re having a burst of energy, try punching the air instead.

Any form of physical activity can reduce stress.

If you observe competitive athletes before the start of a race, they are either pacing about to release nervous energy, or standing still and gathering their thoughts.

When the gun or siren goes off, it’s all systems go and they give it their all.

At the finishing line, relief is written all over their faces.

Punching the air can give a similar sensation as the brain increases the production of endorphins – the neurotransmitters that create feel-good thoughts.

Keep punching by visualizing an imaginary opponent until your arms get tired.

This helps to relieve the muscle tension that accumulates when you experience stress.

As you continue to punch, you will find your focus improving – increasing your concentration and helping you forget the reasons why you were frustrated or angry in the first place.

There is a physical, emotional and mental connection within your body when you punch.

Just making a fist and banging the table shows determination and power (it could scare someone!), and gives you the fighting spirit to enable you to deal with life’s more challenging situations.

It tells the world: “I’m ready for battle – bring it on!”

Punching the air, in whichever direction, is a common sight during celebrations, eg if your girlfriend said yes to your marriage proposal or you win the lottery.

Just look at the audience during a football match – when their favorite team scores a goal, the audience will scream and punch the air in triumph.

Tense faces break into broad smiles and there’s a positive vibration all around.

This is a natural reaction of the body – even kids do this at sporting events – they make a tight fist, and throw pretend punches when they win a shout out game.

Get a toned top

Reducing stress aside, there are a lot of physical fitness benefits to punching the air.

Some people call this shadowboxing.

Boxers usually use this technique to prepare their muscles before engaging in more vigorous boxing exercises.

In shadowboxing, you are using your shadow or reflection to simulate an opponent in order to practise your movements, punches and range.

Some people do it in front of the mirror.

But I’m not referring to this structured shadowboxing or kickboxing – only simple air punches that don’t need any training.

You’ll be surprised how natural your body feels doing it!

I’ve seen nursing home residents do this as part of their hand-eye coordination and physical exercise.

Although air punching is mostly a low impact exercise, it can also be a highly effective endurance workout, especially if you incorporate some additional movements, such as squats and planks.

When you punch, your entire upper body is engaged, and if you punch hard and long enough, you can actually excess burn fat and build some lean muscles.

Basically, there is a whole lot of contraction that happens in so many areas of your body and that’s one of the biggest reasons for muscle gain.

Many of us are still working from home, but we should be taking frequent breaks from our virtual meetings and computer work to get our circulation going.

So stand up and punch the air, people.

Besides mitigating the detrimental health effects of prolonged inactivity (sitting glued behind a screen for hours on end), you’ll boost mental alertness, concentration, and thus productivity.

There is no right or wrong stance when you punch – you can stand with one leg behind the other or with feet hip-width apart.

Strike forward with alternating arms, engage your abdominal muscles and keep your chest up. 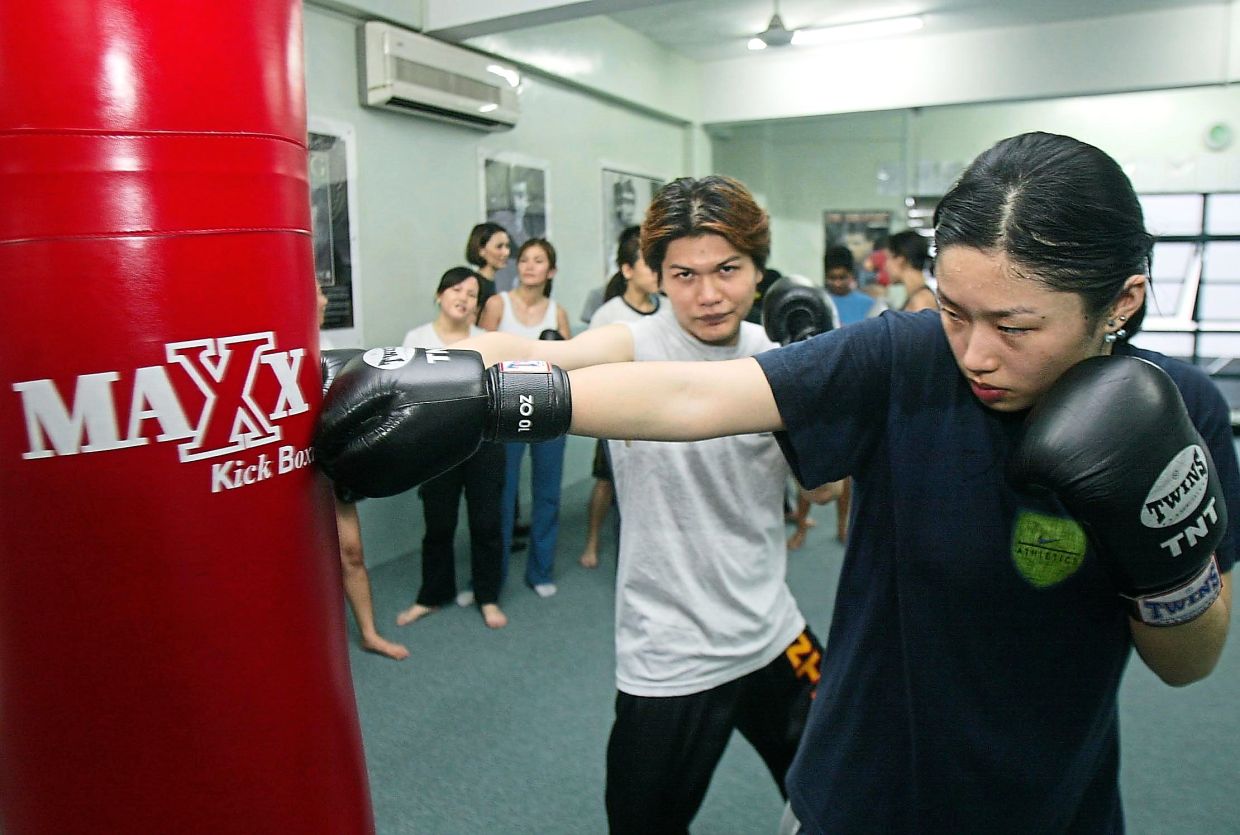 If you’re a bit more serious about punching something, make sure to protect your hands and wrists with gloves.

When I was an undergraduate student in the United States, there was one summer where I lived in an apartment with really thin walls, which I assume was plasterboard.

Our neighbors, whom we shared a balcony with, were four American boys who loved to party.

Almost every weekend, the noisy guests would spill over to our side of the balcony, intoxicated.

One of my roommates was so ticked off with the mess they left behind that she drew a line with a chalk to divide our balcony territory.

Of course, it didn’t work!

Once, a guest was so drunk, he got rowdy and punched our shared wall a couple of times.

It left some cracks, a gaping hole and blood stains on our side.

It doesn’t take much force to punch a hole through those fragile walls, but that guy had to be transported to the hospital to get his finger cuts stitched up.

Thankfully, we were not held liable for the damages and did not need to pay for the repairs.

Now, if you’re serious about punching an object to get a “kick”, then do protect your vulnerable areas, including your wrists and hands, by getting a pair of boxing gloves before hitting – ideally – a punching bag.

Aim for the middle of a punching bag, which tends to be softer than the upper or lower portions.

When you feel that you’ve worked enough stress out of your body, drink some water, then take a few deep breaths to further ease tension.

Almost everyone can punch the air and no formal lesson is required – just avoid hyperextending your arm at the elbow.

And who knows, you may enjoy it so much, you might decide to take boxing up seriously.

If you recall, Prince Harry took up boxing to help deal with the death of his mother, Princess Diana.

He had so much pent-up aggression inside him that he was on the cusp of becoming incredibly violent.

“During those years, I took up boxing, because everyone was saying boxing is good for you and it’s a really good way of letting out aggression.

“And that really saved me because I was on the verge of punching someone; so being able to punch someone who had pads was certainly easier,” he was quoted as saying.

Don’t wait until you spiral out of control, help yourself now.

Revathi Murugappan is a certified fitness trainer who tries to battle gravity and continues to dance to express herself artistically and nourish her soul. For more information, email starhealth@thestar.com.my. The information contained in this column is for general educational purposes only. Neither The Star nor the author gives any warranty on accuracy, completeness, functionality, usefulness or other assurances as to such information. The Star and the author disclaim all responsibility for any losses, damage to property or personal injury suffered directly or indirectly from reliance on such information.